The Lexington Clinic Orthopedics -Sports Medicine Center (LCOSMC) and its Center of Excellence in Tennis Medicine and Science provide a wide range of resources for the United States Tennis Association (USTA) Kentucky members and all-around athletes. Each month, our physicians will answer your questions on tennis sports medicine concerns, including specific tennis related injuries, risk modification, conditioning/nutrition and post return-to-play follow-up. If you have a question for one of our physicians, please fill out the form below. And make sure to visit this webpage regularly; every month has a new article!

What is the role of speed and power in tennis? Do I need it, and what are ways to get it? 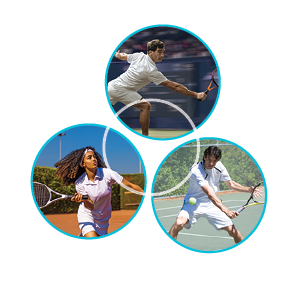 Tennis is all about speed and power-speed to get around on the court and move the racquet to hit the ball, and power to put the most force into ball impact.  This is the third of the 4 “Ss” of conditioning for tennis.  Speed is about moving rapidly and power is about applying force.
Speed has both linear and rotational components.  Linear speed is about moving (usually running) in a straight direction – forwards/backwards or side-to-side.  Linear speed conditioning drills are basically running drills.  You should try to develop a strong start, emphasizing quickly moving to maximum speed, while running under balance and control.  In tennis, linear speed is over short distances, so you should train over those distances – 5 to 15 yards.  You should train in both forwards and backwards movements and side-to-side movements.  Since tennis play occurs in repetitive episodes of short runs, you should run 5 to 6 sets of 5 forward/backward and 5 side-to-side movements, with a short period of rest between sets in each conditioning session.  Some of the sets can be done with the end point of slowing down the movement, but others should be run with the end point of a sudden stop to the movement, to prepare for changes of direction that are commonly needed in running.  In this case, the counter movement should start immediately after the stop.  The exact type of running drills can consist of any movements that will mimic the movements during the tennis match.  They can be done on the court, in the gym or at home.  Running while using weights is probably not best for these drills, as weights add extra load and require different body responses that are not well translated into the movements needed on court.
Rotational speed refers to movements of body segments and usually refers to trunk rotations and arm rotations.  The goal of these conditioning drills is to generate speed of the segments to optimize the force applied at ball impact.  To optimize rotational speed, optimum flexibility around these joints is necessary, so a preliminary stretching program needs to be implemented.  Speed is best acquired by moving the trunk or arm through the full range of motion with low resistance.  Body weight is used first as the resistance, but in progressions, 1 to 5 pound weights held in the hands can be used. This will allow the full range of motion to be accomplished.  Heavier weights can apply too much load to the joint and result in undesirable compensations in activating the muscles. Trunk rotations should be done with the feet stable on the ground and shoulder width apart, and the motion should be from full left twist to full right twist and then reversed.  6 to 8 sets of 5 repetitions can be done each session.  Arm rotations can be done with the full arc of motion, starting with the arms at the side, moving into full overhead motion and back down and with the arm starting at shoulder level and moving from internal to external rotation and back.  Once again 6 to 8 sets of 5 repetitions can be done in each session.
Speed can transition into power.  Power is not the same as strength.  Power is using strength rapidly and in a concentrated fashion.  It requires strength and flexibility.  Power is best conditioned by using medium resistance through short distances and rapid velocities.  Resistance can start with body weight and progress to bands, handheld weights and bars, with relatively high repetitions.  Examples would include 6 to 8 sets of 10 repetitions using 6 to 10-pound weights, medium resistance tubing or 15-pound bars.  The resistance should be moved through a specific arc of motion and should frequently include the motions needed in tennis such as trunk rotations, arm motions of the stroke patterns and leg motions for stopping, starting and cutting.   A good method of improving speed is plyometrics – a stretch/shortening technique that couples relatively slow motion in one direction (lengthening the muscles) with a relatively fast motion in the opposite direction (shortening the muscles).  An example would be slow knee flexion coupled with fast knee extension or slow elbow flexion coupled with fast elbow extension.  These types of exercises are especially helpful in tennis, which is basically a plyometric sport comprised of a series of start/stop, stretch/shortening activities.  Effective plyometric muscle function maximizes the ability to apply power to the stroke and ball impact.  Multiple exercise programs can be used to improve power; a few exercises that are used at the Lexington Clinic Sports Medicine Center are provided below.
While working to maximize power through a conditioning program, or when applying power during play, power can place high levels of potential injury loads on the joints, muscles and bones.  Care must be taken in doing the exercises for power conditioning, especially the plyometric exercises.  Going through too large a range of motion, applying too much resistance, or doing too many sets can lead to acute or chronic overload and injury.  Progressions of extra load, repetitions, or sets should be implemented gradually, with no more than a 15% increase in any component at a time.  Power can be a tennis player’s best friend to win points and matches, but it can turn into an enemy if overload occurs.
Download Speed Exercises