Treatment of Obstructive Sleep Apnea (OSA) is very important to your overall health. There are many options for patients to consider, and it is important that patients consult their physician to find the treatment method that is best for them.

OSA is often treated by non-surgical methods. The standard non-surgical treatment is called continuous positive airway pressure (CPAP). Through a mask, the CPAP device pushes air into the breathing passage which temporarily prevents the collapse of the airway. While effective, CPAP is not a cure, but a support measure. When CPAP is not used nocturnal obstruction to breathing will occur again. Other non-surgical therapies for treating OSA include:

While these treatments will not cure a patient of OSA, they may still be effective in relieving some of the symptoms.

Surgery can successfully treat OSA, eliminating the need for CPAP usage. The basic surgical strategy is to open the sites of obstruction to breathing typically at the nose, palate or tongue base. Some of the procedures are well known such as removal of the tonsils, trimming of the soft palate or straightening the crooked septum. Other, lesser known techniques enlarge the breathing passage behind the tongue. This may entail operation directly on the tongue tendons or indirectly on the jaw.

The type of OSA surgery that you are offered is designed specifically for your particular problem since the blockage to breathing does not always occur in the same location. Various combinations of procedures are sometimes required in order to open the multiple areas of blockage. Snoring can also be eliminated allowing restful sleep for spouses and other family members.

A brief overview of each of the current surgical options for treatment of OSA can be found by clicking the links below:

Nasal, Septal and Adenoid surgeries are sometimes performed in order to open the nasal breathing passages and permit easier breathing. The constant nasal airway obstruction is typically in contrast to the dynamic collapse seen at the level of the palate or tongue, but needs to be considered in every case of Obstructive Sleep Apnea airway reconstruction. Indeed, more than half of the OSA patient population will have findings of nasal airway compromise. Reconstruction of the nose is called rhinoplasty and may be performed to enhance appearance or for functional reasons. The quality of the tissue around the nostrils or deeper in the nose can cause restricted breathing. Weak or malpositioned cartilages around the nostrils can impede nasal breathing as will a droopy nasal tip or excessively narrow nostrils. A "nose job" directed at improving breathing will also usually enhance appearance.

Adverse cosmetic and functional outcomes can sometimes be seen after rhinoplasty. Real and perceived cosmetic deformities are possible. The best result is the nose that looks natural for a given face.

The nasal turbinates are horizontal ridges within the nose. These may become chronically enlarged usually as a result of allergies. Reduction in the size of the turbinates will improve nasal air flow.

The nasal septum divides the nose into right and left nasal passages. A septal deviation is an alteration of the relatively straight and midline position of the septum. If the septum is crooked, it may cause blockage of the nasal breathing passage. It can be straightened in order to improve breathing and is called a septoplasty.

An enlarged adenoid may occasionally interfere with breathing. The adenoid is located in the very back of the nasal cavity above the soft palate. An adenoidectomy removes this excess tissue to allow for unrestricted airflow through the nasal passages and upper throat. Although this is most commonly performed in children, it may be indicated in teenagers or young adults. 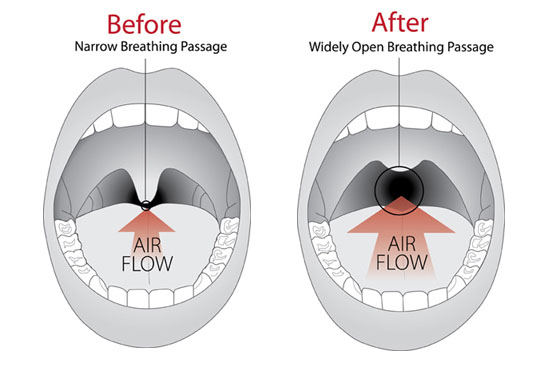 The uvulo-palato-pharyngoplasty (UPPP) and tonsillectomy are often performed as a part of Obstructive Sleep Apnea surgery. The UPPP procedure shortens and stiffens the soft palate by partial removal of the uvula and reduction of the edge of the soft palate. Since there may be other sites of restriction to breathing, such as the tongue base, the UPPP and tonsillectomy may not resolve the OSA. Most patients who snore, but do not have apnea should enjoy a dramatic decrease in loudness of snoring after UPPP.

Complications of the UPPP procedure are not common, but merit discussion. The palate is a valve which separates the nose from the mouth. This valve is like any other in that it may be broken and stuck in an open or closed position. A palate that no longer completely seals the nose from the mouth has the sound of excess nasal tones and possible leakage of liquids out of the nose. On the other hand, rare instances of severe scarring of the palate could potentially worsen the OSA and make speech unusually non-nasal sounding. Care is taken to avoid either complication by judicious planning and careful technical execution of the procedure. Some patients do note a foreign body feeling when they swallow after having had a UPPP and is due to scar formation.

The Genio-Glossus Advancement (GGA) is a procedure which was developed specifically for the treatment of Obstructive Sleep Apnea. Like all surgery for this condition, the operation is designed to open the upper breathing passage. The concept is that a muscle, such as the tongue, will be displaced as its tendon is moved or tightened. The GGA procedure tightens the front tongue tendon; thereby, reducing the degree of tongue displacement into the throat.

The procedure is performed through the mouth through an incision below the gum tissue in front of the lower front teeth. After creating a small rectangular bone window, the tendons that attach the front of the tongue to the jaw are pulled forward on a small bone fragment. This produces a larger space between the back of the tongue and the throat thereby creating a wider airway. Complications resulting from this procedure are very uncommon. There is minimal, if any, alteration in facial appearance. This operation is often performed in tandem with at least one other procedure such as the UPPP or hyoid suspension.

The Hyoid Suspension is a procedure which was developed specifically for the treatment of Obstructive Sleep Apnea. The operation advances the tongue base and epiglottis forward, thereby, opening the breathing passage at this level. The hyoid bone is located just above the thyroid cartilage ("the Adam's apple"). The procedure is performed through a small horizontal incision in a convenient skin crease in the upper neck and takes less than hour to perform. By detaching two tendons on the upper surface of the hyoid bone and some of the muscle on the lower surface, the hyoid can be advanced over the thyroid cartilage and secured in position. Since the vocal cords are not manipulated, the voice should remain unimpaired.

Maxillo-mandibular Advancement (MMA) or double jaw advancement is a procedure whereby the upper and lower jaws are surgically moved forward (Lefort 1 osteotomy of the maxilla and saggital split advancement of the mandible). The concept is that as the bones are surgically advanced the soft tissues of the tongue and palate are also moved forward, again opening the upper airway. The usual movement is about a half an inch. Since the upper and lower teeth are moved the same amount, the bite would be similar before and after operation.

The MMA will always alter and often enhance appearance, but is not disfiguring. The operation is accomplished through the mouth. The jaws may be briefly wired closed following the operation. The procedure is technically involved with the potential for complications as in any surgical procedure, but most patients recover remarkably well from this surgery.

For some individuals, the MMA is the only technique that can adequately create the necessary air passageway that can resolve the OSA condition with finality. 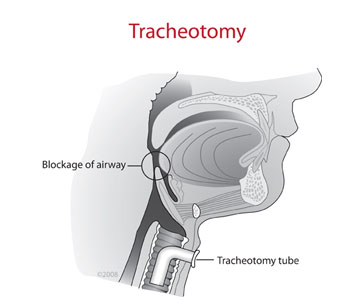 A Tracheotomy is one of the oldest, most shunned, and least understood procedures for Obstructive Sleep Apnea. The concept with this procedure is that any area of blockage to breathing, from the nose to the voice-box, is bypassed by a hole placed into the windpipe. The hole in the trachea is called a stoma. The stoma must be maintained both by daily cleaning and by insertion of a tube. The tracheotomy tube must be kept exquisitely clean; otherwise, painful infections of the stoma will occur, or the tube and/or windpipe could become blocked with secretions.

A tracheotomy does not mean that a patient would not be able to talk. If the tube would be plugged by a finger, then air from the lungs would pass through the voice box allowing one to talk by mouth. When the tube would be unplugged, or open, then air from the lungs would largely bypass the voice box not allowing one to talk by mouth. Some patients plug the tube closed during the day to allow normal conversation by mouth, but release the plug for night-time use when speech is not required, and OSA needs treatment. A special valve could be placed on top of the tracheotomy tube to allow "hands free" speech. Most patients eat without difficulty despite the tracheotomy tube.

Just because a tracheotomy has been placed, it does not necessarily mean that the tracheotomy would need to be permanent. It might be possible to perform some of the operations outlined in this web site and eventually have the tube removed. For example, when OSA is severe and CPAP is not tolerated or ineffective or cardio-pulmonary failure has developed then a tracheotomy may be the initial treatment of choice. This is done to reverse the severe sleep deprivation, depression and cognitive deficits of OSA and to stabilize or reverse the cardio-pulmonary problems as a result of chronic OSA. A month or two later a sequence of procedures can be initiated as indicated (and are outlined in this web site). After the indicated procedures have been performed a sleep study is done with the tracheotomy tube capped shut. If the sleep study showed resolution of the OSA then formal plans could be made to remove the tracheotomy tube and allow the stoma to be closed. Obviously, the likelihood of being able to safely remove the tracheotomy tube because of OSA resolution is dependent on multiple factors including: patient motivation/ interest, anatomical and physiological constraints, disease severity and level of physician expertise in dealing with OSA and its surgical management.

The Somnoplasty procedure uses well established technology with application to OSA. A needle probe is inserted into the tissue of the nose, palate or tongue as indicated by the site of obstruction to breathing. A small electrical current then heats the tissue, but no visible change occurs. During the following six to eight weeks the submerged wound undergoes healing, contraction and stiffening.

The intended result is relief of nasal obstruction when used to shrink the nasal turbinates, diminished snoring when used to reduce the soft palate or elimination of OSA when used for tongue reduction. The main advantages of this treatment are minimal pain and treatment in the office setting. At present, the disadvantages of Somnoplasty treatment for OSA are the need for multiple treatment sessions, overall limited clinical experience with the technique and difficulty with insurance coverage for the procedure.