by Keith Alexander, MD, Kentucky Ear, Nose and Throat
Have you ever had pressure in your ears but did not know why? Do your ears hurt when you are eating or swallowing? Do your ears hurt or pop when you go to high altitudes? You are not alone.
You likely have a clogged eustachian tube. This long thin structure connects the back of your throat to each ear. The eustachian tube equalizes middle ear pressure whenever you swallow. This function is necessary for normal hearing and balance.
Unfortunately, anything that causes nasal congestion can lead to poor eustachian tube function. Common conditions such as allergies, sinus infections and even the common cold can lead to a stuffy nose with subsequent ear pain, muffled hearing, dizziness and possible ear infections.
This condition usually gets better when nasal congestion improves. However, for some, the symptoms persist becoming chronic and often quite annoying. The earache may get worse over time. Sometimes the ear ‘pops open’ with temporary improvement in symptoms including hearing only to suddenly return to the clogged muffled state.
Treatment is directed to the nasal congestion and at getting the eustachian tubes to open or clear. Antibiotics may be administered if the condition has led to otitis media or infection behind the eardrum.
Nasal decongestants are often temporarily prescribed either as a pill (for example Sudafed® or Mucinex®D) or as a nasal spray (for example Afrin® or Neo-Synephrine®). Non addicting allergy nasal sprays (such as Nasocort®, Flonase® or Azelastine) are often prescribed sometimes in combination with oral anti-histamines (like Claritin®, Zyrtec® or Xyzal®) in an attempt to control allergies.
Opening the eustachian tube or “popping the ears” is a very safe and effective treatment. One common technique is pinching the nose and swallowing several times or yawning. Another technique involves trying to blow out forcefully while pinching your nose and keeping your mouth closed. This technique is called a Valsalva Maneuver and is often used on airplane flights to clear the ears when flying at high attitudes.
Frequent popping the ears (15 times/day) for several days in a row is often required before the ears feel unclogged and back to normal. As a last resort, a small pressure equalizing tube can be temporarily placed in the eardrum to equalize middle ear pressure.
More long-term treatment may involve allergy testing by an Ear, Nose and Throat or Allergy physician and if appropriate, allergy shots or sublingual immunotherapy. If left untreated, eustachian tube dysfunction can lead to recurring ear infections, hearing loss and even chronic dizziness.
If you are experiencing ear pressure or are having trouble swallowing, call Lexington Clinic at (859) 258-4362 to schedule your appointment with an ENT specialist. 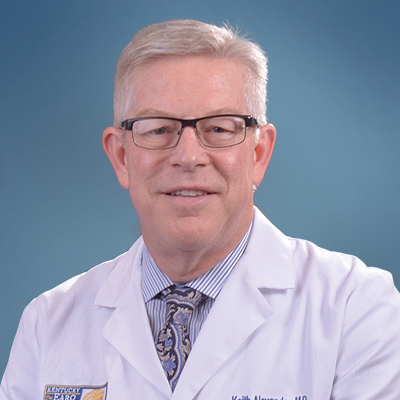 Keith Alexander, MD is board-certified in Otolaryngology. He provides services in adult and pediatric ear, nose and throat disorders, and treats allergy and sinus patients of all ages. He specializes in functional and cosmetic nasal surgery, including rhinoplasty. Dr. Alexander can be reached at (859) 278-1114.